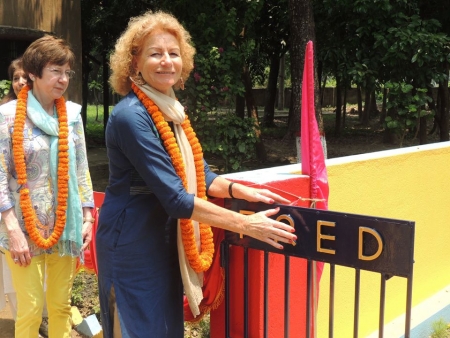 On Tuesday 16 April 2019, the new Fred Kahl Health Care Centre was inaugurated by Hazel Nash ONZM in memory of her late husband.

Fred Kahl died on the 22nd May 2017 and since then the ex-New Zealand teacher, police officer, Eton dame and outdoor educator has asked for donations towards a health care centre, the refurbishment of the girls’ sick-bay and the general upgrading of the children’s medical facilities.

Fred spent time at Udayan in 2013 and 2014 and was greatly moved by the children’s joy and their gratitude for things many Westerners take for granted. In conjunction with the Juniper Trust, he and Hazel financed the creation of a monsoon-proof vegetable garden.  Udayan is now self-sufficient in nutritious vegetables for seven months of the year, and growing them teaches the students a skill they can use in later life. The senior girls were particularly drawn to Fred’s gentle, empathetic yet fun-loving ways, and to his interest in their accomplishments. In return they taught him their dances! 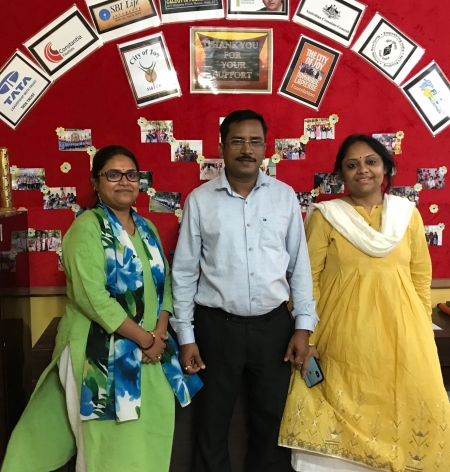 The need to improve the Udayan medical facilities did not escape Fred’s notice. Only his deteriorating health prevented him from returning to do more, and the creation of a health care centre seemed a fitting memorial.

The generosity of many associated with Fred Kahl, Hazel Nash and Eton has raised approximately £57,000, which will not only upgrade the facilities at Udayan but also support ongoing health and medical costs for some years.

It was an emotional time for me and I feel overwhelmingly grateful to Udayan and City of Joy Aid, UK for backing this ‘dream’ of improving the children’s health and also creating a legacy for my wonderful husband and soulmate. Thank you also to the joyful, talented children who performed in the inauguration concert, to the Director Dipak Sahu, and to the Udayan staff who made this such a memorable occasion.

Over the last 49 years, Udayan has been a home for children of leprosy-affected families. We have ensured that the children are cared for with love, respect and security. During that period many children affected by stage 1 leprosy have received special care and treatment at Udayan. Many others have suffered from other illnesses from time to time and received proper treatment. But this noble initiative by Hazel Nash, in memory of her late husband, Fred Kahl, will help us to provide better medical facilities for our children. The refurbished Fred Kahl Health Care Centre has been designed in a child-friendly, joyful and colourful manner so that sick children will be treated in an environment conducive to recovery. We have made it possible with the support of City of Joy Aid, UK.  I would like to give special thanks to all the trustees (Kathryn, John, Caroline and Chris) of City of Joy Aid, UK for their support.

City of Joy Aid, UK would like to thank all donors for their support of this project and hope to see its impact at Udayan for years to come.